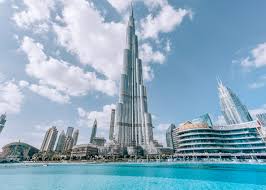 Dubai's Burj Khalifa was formerly known as the Burj Dubai before its inauguration in 2010. At 829.8 meters (2,722 feet, a little over half a mile) in height, and with a roof height (including a 244 meter spire) of 828 meters (2,717 feet), this has been the world's tallest structure and building since it was completed in 2009, surpassing Taipei 101 in the standings.

The exterior of the Burj Khalifa was completed in 2009, five years after its construction began. Most of the building's structure is made of reinforced concrete, though some structural steel comes from the Palace of the Republic in East Berlin, the former East German parliament. As part of a new development called Downtown Dubai, the building was opened in 2010.

As the centerpiece of a mixed-use development of vast dimensions, it is designed to stand out. Dubai's government decided to build the building in order to diversify its economy away from oil, as well as gain international recognition. The Burj Dubai was initially named Burj Dubai but was renamed in honour of the ruler of Abu Dhabi and president of the United Arab Emirates, H.H Sheikh Khalifa bin Zayed Al Nahyan. In addition to being the tallest building in the world, the building broke numerous height records.

Adrian Smith, whose firm designed the Willis Tower and One World Trade Center, designed the Burj Khalifa. The architect was supervised by NORR Group Consultants International Limited and the engineer was from Hyderabad Consulting. In the Great Mosque of Samarra, for example, the design is based on Islamic architecture. Y-shaped tripartite floor geometry is designed to optimize hotel and residential space. Buildings with wings and a buttressed central core are supported at their height. Although this design was inspired by Tower Palace III, Burj Khalifa utilizes vertical transportation with the exception of egress stairs in each of its wings. Furthermore, the structure is protected with a cladding system that will withstand the hot summer temperatures in Dubai. It contains a total of 57 elevators and 8 escalators.

It is the centerpiece of a large-scale, mixed-use development which includes 30,000 homes, 9 hotels, 3 hectares of parkland, 19 residential skyscrapers, the Dubai Mall, and the 12-hectare artificial Burj Khalifa Lake.