Backgammon is one of the oldest Board Games for two players. The playing pieces are moved according to the roll of dice , and a player wins by removing all of their pieces from the board before their opponent. Backgammon is a member of the tables family, one of the oldest classes of board games in the world.

Takhteh (also spelled "Takhte") is the Persian name for backgammon. The rules are similar but not exactly the same as Western backgammon. A list of the differences appears at the bottom of this page. The same game is called TAVALA in Arabic.

The game remains popular today, and backgammon sets are more than just playing boards: the fine craftsmanship that goes into their construction makes them as enjoyable to look at as they are to play on. 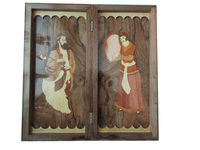 Backgammon involves a combination of strategy and luck (from rolling dice). While the dice may determine the outcome of a single game, over a series of many games, the better player will accumulate the better record. Thus, records of matches between players are good indicators of relative skill. With each roll of the dice, players must choose from numerous options for moving their checkers and anticipate possible counter-moves by the opponent. In variants  that originate from early 20th century New York, players may raise the stakes during the game. There is an established repertoire of common tactics and occurrences.

A5. They are supposed to come out; this is because wood can expand and contract.