Enamel is a brilliant art of fire and soil, whose history goes back to 1500 B.C.

Enamelworking and decorating metals with colorful and baked coats is one of the distinguished courses of art in Isfahan . Mina, is defined as some sort of glasslike colored coat which can be stabilized by heat on different metals particularly copper. Although this course is of abundant use industrially for producing metal and hygienic dishes, it has been paid high attention by painters, goldsmiths and metal engravers since long times ago. In the world, it is categorized into three kinds as below:

The art of "Mina kari" or Enameling is an special coloring method with mina glaze to paint decorative dishes, pots and vases.

It is called miniature of fire, the art of painting, coloring and ornamenting the surface of metals by fusing over it with brilliant colors that are decorated in an intricate design. Mina is the feminine form of Minoo in Persian culture, meaning heaven. Mina refers to the Azure color of heaven. 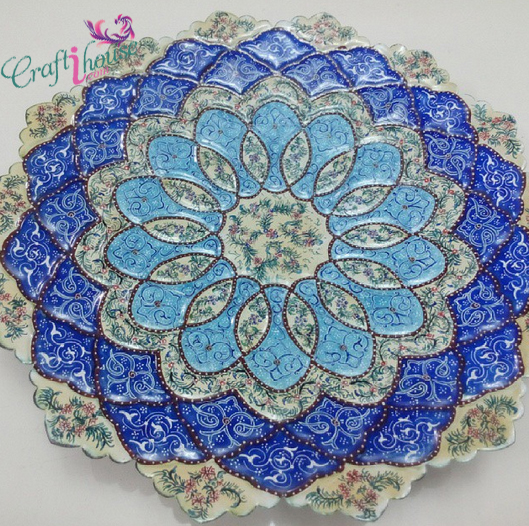 What of more availability in Isfahan is the painting enamel of which a few have remained in the museums of Iran and abroad indicting that Iranian artists have been interested in this art and used it in their metal works since the Achaemenian Aand the sasanid  dynasties. The enamels being so delicate, we do not have many of them left from the ancient times. Some documents indicate that throughout the Islamic civilization of and during the Seljuk & Safavid and Zand dynasties there have been outstanding enameled dishes and materials. Most of the enameled dishes related to the past belong to the Qajar Dynasty  between the years 1810–1890 AD. There have also remained some earrings. Bangles, boxes, water pipe heads, vases, and golden dishes with beautiful paintings in blue and green colors from that time, Afterwards, fifty years of stagnation caused by the World War I and the social revolution followed. However, again the enamel red color, having been prepared, this art was fostered from the quantity and quality points of view through the attempts bestowed by Ostad Shokrollah Sani'e zadeh, the outstanding painter of Isfahan in 1935 and up to then for forty years. 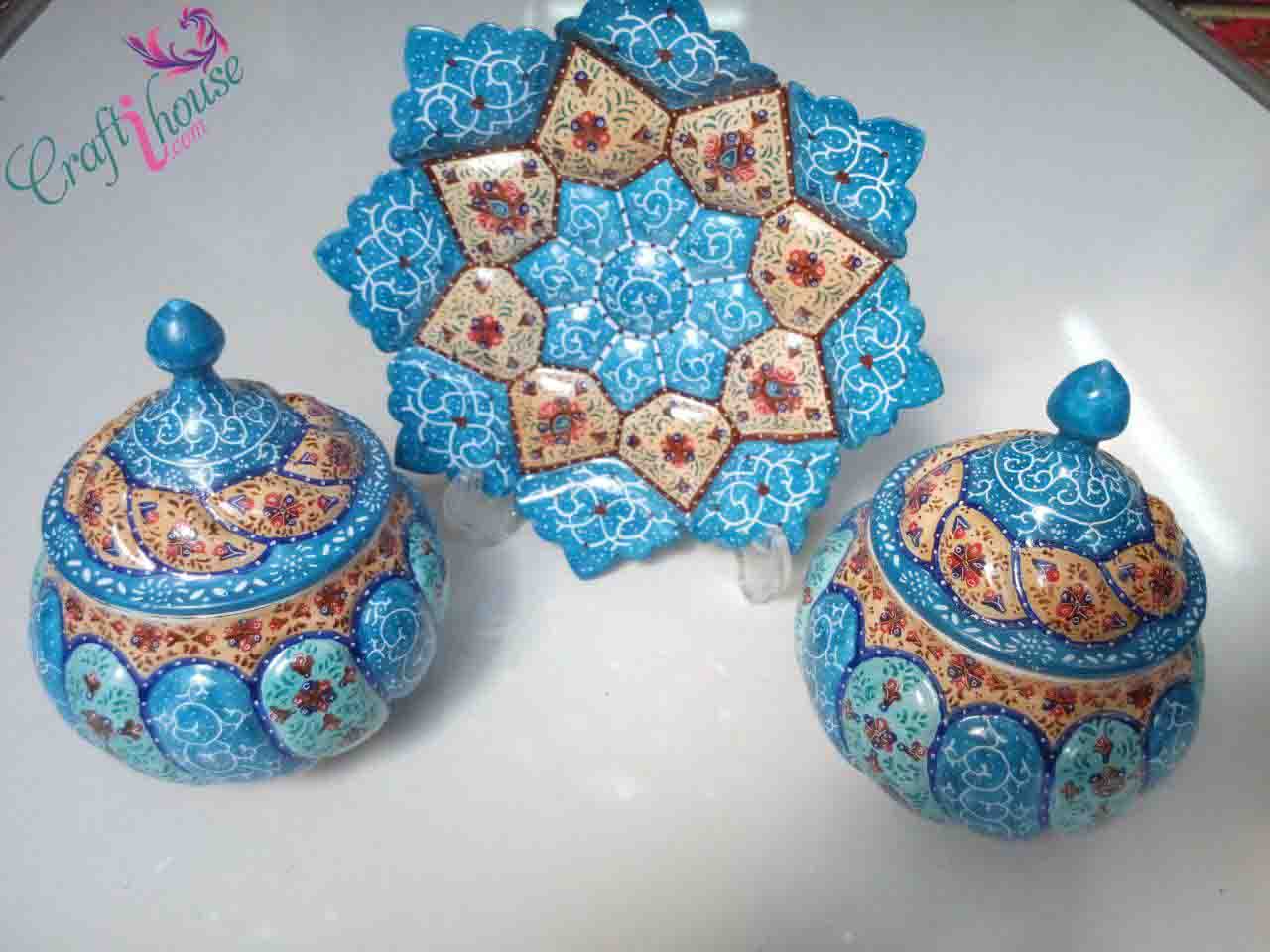 Studies on enameling shows that Bizans enameling is based on Iranian enameling. The oldest existing examples confirm the claim that the enamel as well as many other arts were first found in Iran, then has made its way to other countries. In the Mongolian era a new method in metalworking and enameling came to existence. Arabic patterns and images were replaced by images and patterns showing portrait and costume of Iranian royals. During the Timurid era inlaying on metal reached its most eastern style. In the Safavid era the patterns used in enameling and metalworking went under change .During the era silver dishes were ornamented with miniature patterns showing banquets of palaces, hunting ceremonies and horse riding. Enameling also enjoyed spiral (Eslimi) and floral patterns and red color became more common. Isfahan was one of main centers of practicing enameling and still it is.

Enamel is naturally transparent, this transparency is the result of tin oxide and its composition has remained unchanged from ancient times until today. Enamel has different steps. The first step is taken by coppersmith, who make targeted dishes in different shapes and measures ,then white glaze is applied to the dish by enamel specialists. process involves applying glaze 3-4 times to the dish and then firing it under the furnace at a temperature of 700.c to make the glaze stable. At this stage painting is done on the dish, then it is fired under the furnace at a temperature of 400-500 B.C.

Colors used in enamel is obtained from different sources, red from gold, green from copper ,blue. turquoise and white was obtained from a special color.