A Persian carpet ( فرش‎‎ farsh, meaning "to spread"; sometimes قالی qālī) is a heavy textile, made for a wide variety of utilitarian and symbolic purpose, produced in Iran and surrounding areas which once belonged to the Persian Empire , for home use, local sale, and export. Carpet weaving is an essential part of Persian Culture and art. Within the group of Oriental rugs or Islamic carpets produced by the countries of the so-called "rug belt", the Persian carpet stands out by the variety and elaborateness of its manifold designs.

Persian carpets and rugs of various types were woven in parallel by nomadic tribes, in village and town workshops,etc . As such, they represent different, simultaneous lines of tradition, and reflect the history of Iran and its various peoples. The carpets woven in the Safavid court manufactures of Isfahan during the sixteenth century are famous for their elaborate colors and artistic design, and are treasured in museums and private collections all over the world today. Their patterns and designs have set an artistic tradition for court manufactures which was kept alive during the entire duration of the Persian Empire up to the last royal dynasty of Iran.

Carpets woven in towns and regional centers like Tabriz, kerman, Mashhad, Kashan, Isfahan, Nain and Qom are characterized by their specific weaving techniques and use of high-quality materials, colors and patterns.

Art of weaving has long history starting from the ancient times. Leads of today’s tradition of oriental carpets, are found in ancient nomadic tribes of Central and West Asia, where winter was a big reason to adopt woolen carpets as a shield against sever weather conditions.

Besides it was an indispensable ingredient of their home decor while they kept moving up & down. Simply carpets were at once a roving home and a cushion against the bitter winter.

As I said weaving is one of the most ancient crafts in the world. It is mentioned in Old Testament and in Homer's IIiad.

Documents about weaving exist from the period of the Sassanid Dynasty, which ruled Persia from the third century to the middle of the seventh century. Woolen carpets woven in Persia are referred to in the Chinese Sui Annals(A.D. 590-617). 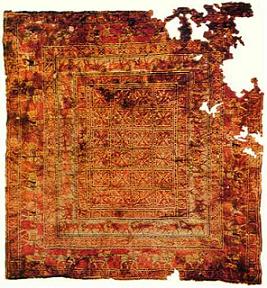 Perhaps the oldest known hand-knotted oriental rug was excavated from the Altai Mountains of Central Asia near Pazryk in 1948.

It was found in a semi-frozen Scythin burial mound. This rug dates from the 4th century B.C. and bares the name "The Pazryk Carpet". Today the rug is in the Hermitage Museum in Leningrad, Russia.

The carpet is sophisticated with floral, geometric, and pictorial designs. It has approximately 225 symmetrical knots per square inch.

The rug is approximately 2400 years old (fragmented) but shows a clear example of how good hand-knotted rugs were made and are still produced today.

Today, rug weaving is by far the most widespread handicraft in Iran; it is also the best-known one abroad.

Persian rugs are renowned for their richness of color, variety of patterns and quality of design

Although weaving of Persian rugs is predominantly mechanized now, the most popular and expensive ones are still hand woven in many parts of Iran, such as Baluch Rugs, Shiraz Rugs, and Wiss Rugs etc still reflecting the rich art and culture of ancient Persia.

The Carpet Museum of Iran in Tehran houses some of the best works in the history of Persian rug weaving.

Honestly History of Persian Rugs include different Histories. Because In Persia, there are different villages different region created their own histories