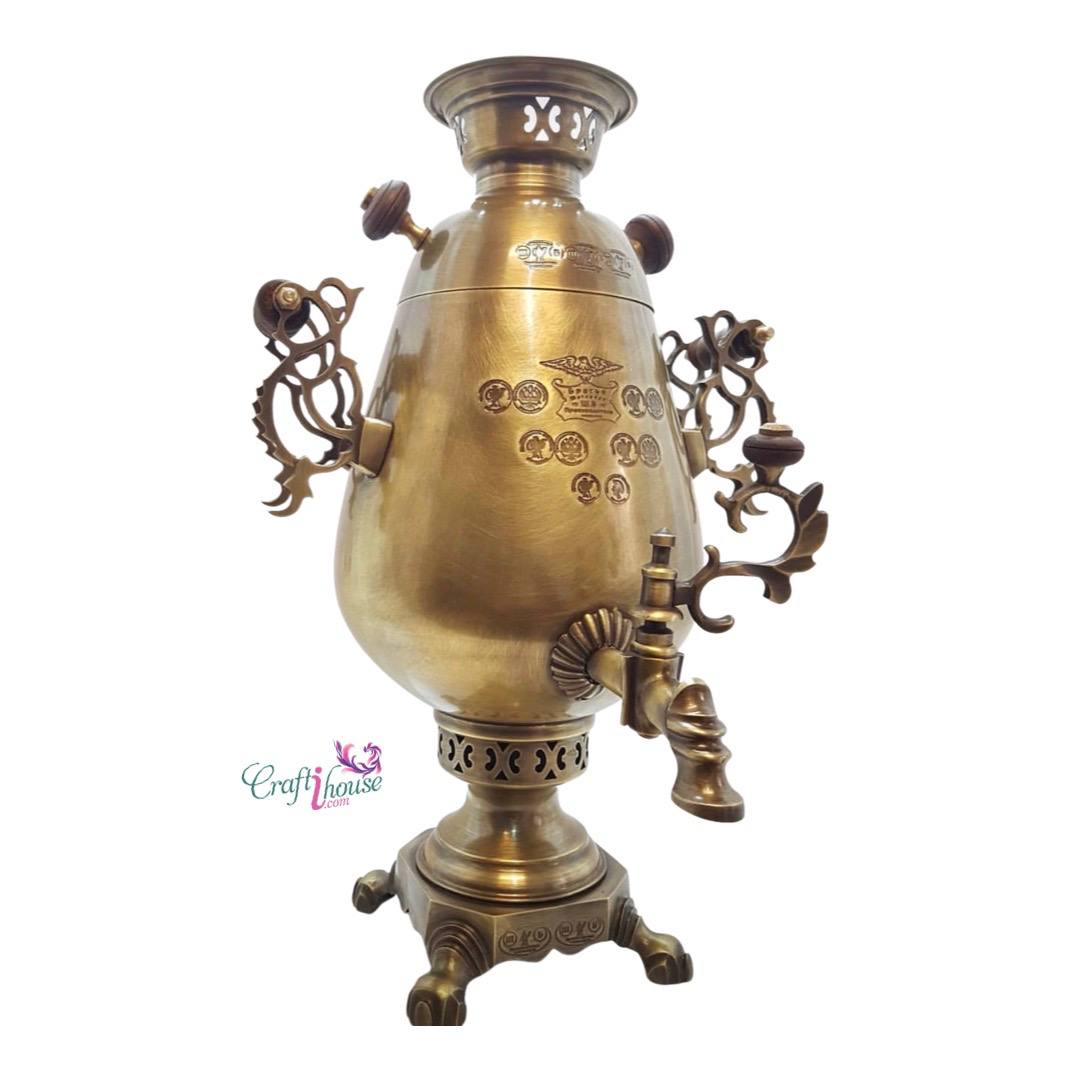 In Russia, a samovar is a metal container traditionally used to heat and boil water. In spite of its origin in Russia , the samovar is well known outside of Russia and has spread through Russian culture throughout Eastern Europe, Central and South Asia , IRAN and Turkey. As heated water is typically used to make tea, many samovars have a ring-shaped attachment around the chimney that can hold a teapot filled with tea concentrate to heat. Traditional samovars heat water with coal and kindling, but many newer samovars use electricity to do the same in a manner similar to an electric water heater. Beautiful craftsmanship is a distinguishing feature of antique samovars.

In general, samovars are made from iron, copper , brass, bronze, silver, gold, tin, or nickel. Samovars are made up of several parts, including a body, base and chimney, cover, steam vent, handles, tap, crown, chimney extension, and top. You can shape the body into an urn, krater, barrel, cylinder, or sphere. A variety of sizes and designs are available, from large, "40-pail" ones (though generally metaphorical, food-service versions were often very large indeed), down to smaller family-sized ones, which hold 4 liters (1.1 US gal), to more modest ones, with a capacity of just 1 liter (0.26 US gal).

Traditionally, a samovar is a large metal container with a tap at the bottom and a metal pipe running vertically through the middle. Fuel is injected into the pipe, which is ignited to heat the water within the container. The top of the smoke stack has a small (6 to 8 inch/15 to 20 cm) smoke stack for draft. Once the water has boiled and the fire has been extinguished, the smoke stack can be removed, and a teapot placed on top to be heated by the rising hot air. In the teapot, zavarka, a strong concentrate of tea, is brewed. When drinking tea, this concentrate is diluted with boiled water from the main container, usually at a 10-to-1 ratio of water to tea, but tastes vary.

The Russian word was adopted as Persian: سماور samovar, and Turkish: semaver.

Expats around the world maintain the samovar culture that has its analogy in Iran. The use of samovars in Iran dates at least two centuries back, and electrical, oil-burning or natural gas-consuming samovars are still a common sight. The Persian word for samovar is samăvar. Persian art motifs were used by Iranian artisans in the production of samovars. A few workshops still produce handmade samovars in the Iranian city of Borujerd, which is historically a center of samovar production. Borujerd's samovars are often made with German silver, in keeping with Varsho-Sazi art. As examples of Iranian art and handicraft, the art samovars of Borujerd are often displayed in Iranian and Western museums.

Kashmiri samovars are made of copper and have engraved or embossed calligraphic motifs. There are actually two types of samovar in Kashmir. Brass samovars were used by local Hindus called Kashmiri Pandits, while copper samovars were used by Muslims. Nickel was applied to the inside of brass samovars. A samovar contains a fire-container in which charcoal and coals are stored. Water boils in a space surrounding the fire-container. We add salt, cardamom, cinnamon, and green tea leaves to the water.

A çaydanl*k Turkish samovar is a favorite souvenir among tourists, and charcoal samovars are still used by farmers today. Nowadays, they have been replaced with the çaydanl*k (lit. "teapot"), a metal teapot with a smaller teapot on top which serves as a cap for the lower one. The lower part of a Turkish tea pot is used to boil water, whereas the upper part, called demlik, is used to concentrate the tea. From the demlik, tea is poured and then diluted with plain boiling water from the lower kettle to the desired strength. Traditionally samovars  are made of brass or copper, and occasionally silver or gold, although they can now also be made from stainless steel, aluminum, or ceramic with plastic, steel, or aluminum handles.