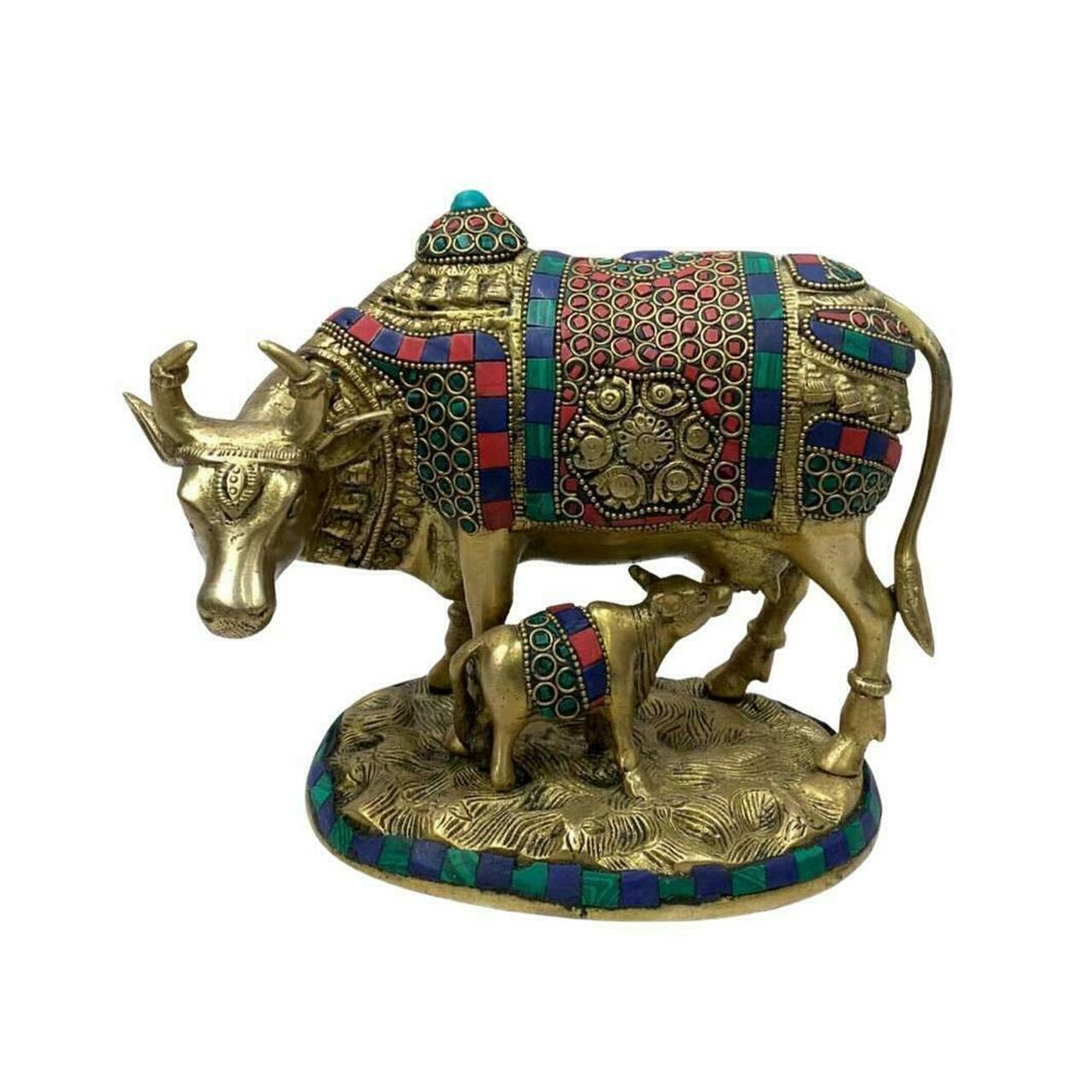 also known as Surabhi (सुरभि, Surabhī) , Hindu considers Gou Mata to be a divine bovine deity. Her owner is often considered to be the happiest when she provides him with whatever he wants. In iconography, she is often depicted as a white cow with a female head, breasts, and wings, or as a white cow containing multiple deities. In Hindu mythology, cows are the manifestations of the creative power of the god Kamadhenu. It is also noteworthy that Kämadhenu is not worshipped as a goddess exclusively. In general, throughout the Hindu population, she is revered by the veneration of cows.

According to Hindu scripture, Kamadhenu was born in a variety of ways. Many narratives describe her as the daughter of Daksha, or as the wife of Kashyapa, who emerged from the ocean of cosmic churning. However, other texts state that Kamadhenu belonged to Jamadagni or Vashista (ancient sages), and that those who tried to steal her from either of them ultimately faced dire consequences. She is also capable of producing fierce warriors to protect her sage-master. She plays an important role in providing milk for the oblations of her sage-master. The sage's hermitage isn't the only place she resides, as Goloka - the realm of cows - and Patala, the netherworld, are also mentioned.

The sacred cow is often known as Kamadhenu or Kamaduh, which is regarded as the bestower of prosperity in Hinduism, according to indologist Madeleine Biardeau. Devi (the Hindu Divine Mother) is often referred to as Kamadhenu, and she's closely related to the fertile Earth Mother (Prithvi), who is often referred to as a cow. A sacred cow is associated with "purity, non-erotic fertility, sacrifice and motherly nature, [and] sustenance of life".

"Kamadhenu is a popular and enduring image in Indian art," describes Frederick M. Smith. The generic cow-called Kamadhenu-is believed to be the dwelling place of all gods. In the Vedas, her four legs are the scriptural Vedas; on her horns, the triune gods Brahma (tip), Vishnu (middle) and Shiva (base); her eyes are the sun and moon gods, her shoulders the fire-god Agni and the wind-god Vayu and her legs the Himalayas. In poster art, Kamadhenu is often depicted in this form.

The image of Kamadhenu has her body shaped like a white Zebu cow, her head crowned with a woman's head, and her wings and tail shaped like eagles. This form was influenced by the iconography of the Islamic Buraq, a woman with a horse's body and wings. Kamadhenu is also depicted in this way in contemporary poster art.

It is often depicted that Dattatreya is accompanied by a cow, which is identified with Kamadhenu. According to the iconography of the deity, she represents Brahminical and Vaishnava aspects of it, contrasting with the accompanying dogs, which are non-Brahminical. Additionally, the icon represents the five classical elements (Panch Bhuta). One hand of Dasatreya sometimes holds a cow, representing the divine cow.